Brian K. Goodger serves as the Associate Director for the Office of Logistics and Acquisition Operations (OLAO) in the Office of the Director of the National Institutes of Health, he has held this position since July 30, 2012.

From 2005 – 2012, Mr. Goodger was the Deputy Director for the office of Acquisitions Management, Contracts & Grants (AMCG) in the office of the Assistant Secretary for Preparedness and Response (ASPR) in the Office of the Secretary. In his capacity as Deputy Director he was responsible for contracting and acquisition management for all ASPR acquisitions; including a portfolio of over 325 contracts totaling $9 Billion. In 2008, Mr. Goodger was nominated by the HHS Senior Procurement Executive for the Ida Ustad Award; an award given out annually by GSA for the top contracting officer in government. Mr. Goodger has procured many medical countermeasures including: smallpox vaccine, botulism antitoxin, anthrax antitoxin, flu vaccine, and anthrax vaccine. Immediately prior to joining ASPR, Mr. Goodger worked from 2002 – 2005 for the National Cancer Institute, Office of Acquisitions, in the National Institutes of Health. As a Contracting Officer he provided contract support to the NCI Director and the Division of Cancer Epidemiology & Genetics. Mr. Goodger started his federal career as a member of the inaugural class of the Department of the Interior’s Government-Wide Acquisition Management Internship from 2000 – 2002. As an acquisition management intern, he rotated through the General Services Administration, the Executive Office of the President, the National Institutes of Health, and the Department of Transportation. Working with senior acquisition officials and training with seasoned contracting officers, Mr. Goodger honed his skills and finished ranked #1 in his class.

Additionally, Mr. Goodger is the recipient of numerous United States government awards and honors, he is also FAC-C level III, has held an unlimited Contracting Officer’s warrant, holds a M.S. in Management with a concentration in Government Contracts, and is a graduate of the OPM’s Federal Executive Institute, Harvard’s Senior Executive Fellows program, NIH’s Senior Leadership Program at the University of Maryland, and the Navy Post Graduate School in 2020.  Finally, Mr. Goodger has participated numerous times in the HHS and NIH Acquisition Mentoring Program.

Mr. Goodger is from the area locally, and a proud graduate of DeMatha High School. 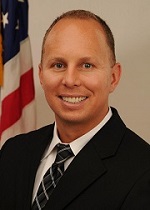